Due to the passage of time the content of this article might be out of date. In order to find the latest content go to: https://www.aqform.com/en/news

Polish product – equilibra BALANS luminaire – has been awarded with Special Mention distinction in international German Design Award 2017 contest. Special Mention is awarded to works whose design features particularly successful subaspects or solutions – an award that honours the commitment of companies and designers. equilibra BALANS lamp was created in collaboration of Aquaform, Polish luminaires manufacturer and the designer Mr Piotr Jagiełłowicz.

equlibra BALANS was featured in Lighting category for its extraordinary design – says justification of the reward. The most characteristic feature of the lamp is its asymmetrical suspension. Eye catches it among the other lamps as an ‘anomaly’, something that shouldn’t happen. It’s hard to comprehend watching it from the physical point of view. Yet it is perfectly levelled thanks to the bubble level and the set of weights inside the case. ‘In the process consisted of preparations, planning, development and implementation we designed a lamp with innovative suspension using carbon fibre. A product with well balanced construction and form’ – says the designer Piotr Jagiełłowicz.

German Design Award is a multi-stage contest. Applications that are sent by the participants are graded by German Design Council. Only those with outstanding design are nominated to the further stages. This year jury was consisting of about 50 experts from different specialisations – starting from business, through education, knowledge, ending up on world of design. On the 2-day session jury grants awards to the nominated projects. More about jury – German Design Award site.. The award ceremony will take place on 10.02.2017 in Frankfurt.

German Design Award was inaugurated in 2012 with over 1500 applications. This year edition gathered over 4000 applications, including 758 from abroad. Applications are nominated in 3 main categories: Excellent Communication Design, Excellent Product Design and Universal Design.

Polish luminaire was submitted to the competition by an external entity. “Nomination for equlibra BALANS was very pleasant surprise” – says Aquaform CEO, Wojciech Starowieyski – “it showed, that the product is interesting by its form and construction, that somebody, maybe consumer, decided to put it forward to German Design Council debate. 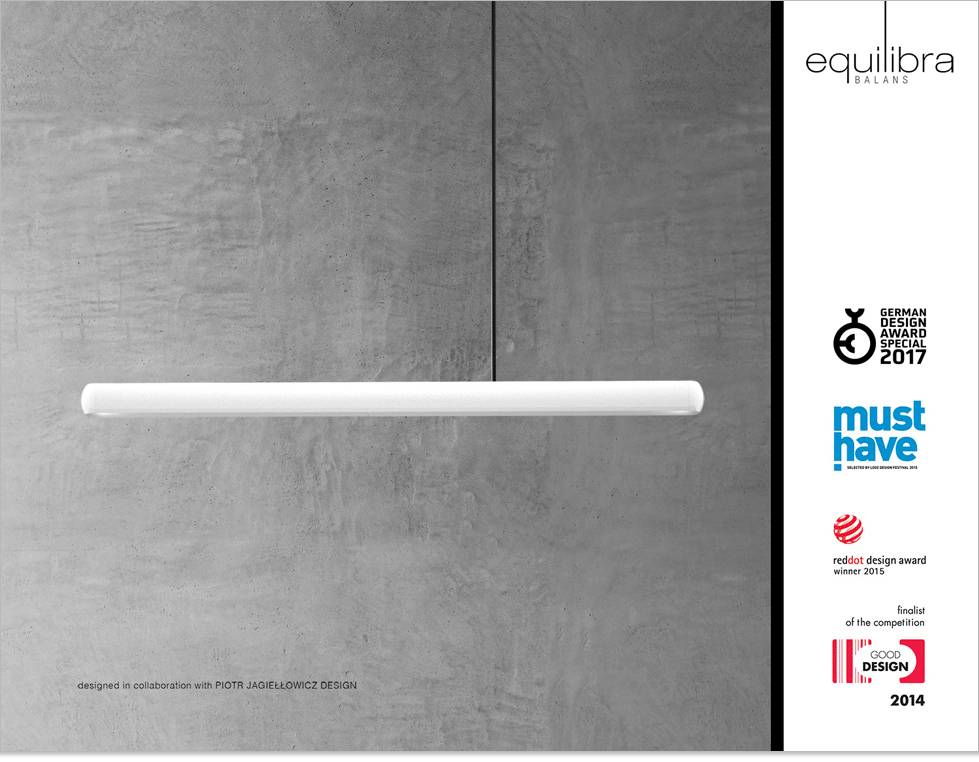 Piotr Jagiełłowicz; graduated from Academy of Fine Arts in Krakow on the Industrial Forms Department. Author and co-author of awarded projects , among others 1st place on CORAM DESIGN AWARD 2003, co-author of IDEA work, co author of featured work in architectural contest for the project of WWII Museum in Gdansk (2010). In collaboration with Aquaform he designed eg. equilibra luminaires family, OLEDRIAN or THIN TUBE. Equilibra BALANS luminaire reached the final of Dobry Wzór (Good Design) 2014 contest , received Red Dot Design Award 2015 and it was featured in Special Mention German Design Award 2017. Collection OLEDRIAN was rewarded with iF Design Award 2016 and Muuuz Intrnational Award (MIAW) 2016. It was also nominated to German Design Award 2017 and reached the final of Dobry Wzór 2016 contest.