The equilibra BALANS lamp from the portfolio of the company AQUAFORM (Cracow -Poland) has won the Red Dot: Product Design 2015.

The Red Dot: Product Design Award is an award referred to as the design Oscar; it is considered the most prestigious award in the field of design won by artists and designers from all around the world.


Equilibra BALANS received the award in the category of lighting and lamps. Its author is Piotr Jagiełłowicz, a designer."We have created a product that was supposed to be balanced, literally and figuratively, in the form and structure. We used an innovative method of asymmetric suspension which was possible thanks to the use of carbon fiber. We wanted it to have a modern and friendly nature, lending the interior some style"- says the designer of the lamp.

"Clearly, you have shown high competence and courage in the design and for both of these features you have been awarded in the jubilee 60th edition of the Red Dot: Product Design competition" - remarked Professor Dr Peter Zec, Founder and president of Red Dot.

In this year's competition 1 994 participants from 56 countries applied presenting 4 928 designs. The submitted works were evaluated by 38 members of the jury. 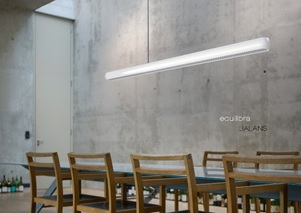 Wojciech Starowieyski, President of AQUAFORM adds that the "red dot" is a dream of every company that specializes in the design and production of utility objects."I am glad that just like the OSCARS help to popularize good cinema in the world, so we managed to make a brick that will be used to build the prestige of the design internationally. Red Dot Design is the desire of many artists, designers and companies around the world .." - says Wojciech Starowieyski..

The award ceremony and gala will take place on 29 June 2015 in Essen.

Red Dot Design Award is an award called the design Oscar; it is considered the most prestigious award in the field of design. The history of the award dates back to 1954 when it was first granted by the Design Zentrum Nordrhein Westfalen in Essen, Germany. The winning designs are presented in the Red Dot Design Museum, in a former coal mine Zollverein in Essen – a building entered into the UNESCO World Heritage List. The competition prizes are awarded for outstanding achievements in the field of design, innovation and for creating new trends in three major categories: product design, communication design, design concept. Designs are assessed by an international jury.

***
AQUAFORM is a Polish company producing lighting fixtures. The company has been operating for more than twenty years, its founder being Wojciech Starowieyski. The manufacturing facility and the company's registered office are in Czernichów near Cracow. AQUAFORM offers modern, architectural lighting fixtures and decorative lamps of the highest quality, based on the latest LED and OLED technologies. Not only does it follow the current trends but it also sets new ones offering unique solutions and modern design.