Behind each product there is a process that often consists of few or even several months of work. During this time, you go through many stages: from concept, through tests, to implementation into production. And each of them presents different, sometimes unexpected, challenges. That is why it is important for everyone involved in the design process to know at what stage we are and in which direction we are going. It was like this with the MODERN BALL collection from the very beginning to the end. We have invited a duo from the DECHEM studio: Michaela Tomiškova and Jakub Janďourek, with whom we previously worked on the MODERN GLASS collection. How was the journey from concept to implementation this time?

Glass is one of the most traditional materials in the lighting industry. It was among the materials that were used to cover the flame of a candle or an oil lamp at a time when artificial lighting was just beginning to develop. Things have changed since then, but not the charm of glass. On the other hand, the ball is one of the most timeless shapes, perfect in every way. We were sure that the combination of these two archetypes with modern LED technology has great potential. We invited the Czech design studio DECHEM, which specializes in working with glass, to cooperate on the project.

The goal that has guided us from the very beginning was to create architectural lighting that would balance the beauty of the form with its functionality. MODERN BALL was designed to meet the specific needs of users and interior designers. The market requires lighting with a decorative function that combines high efficiency with visual comfort. These were our design guidelines. 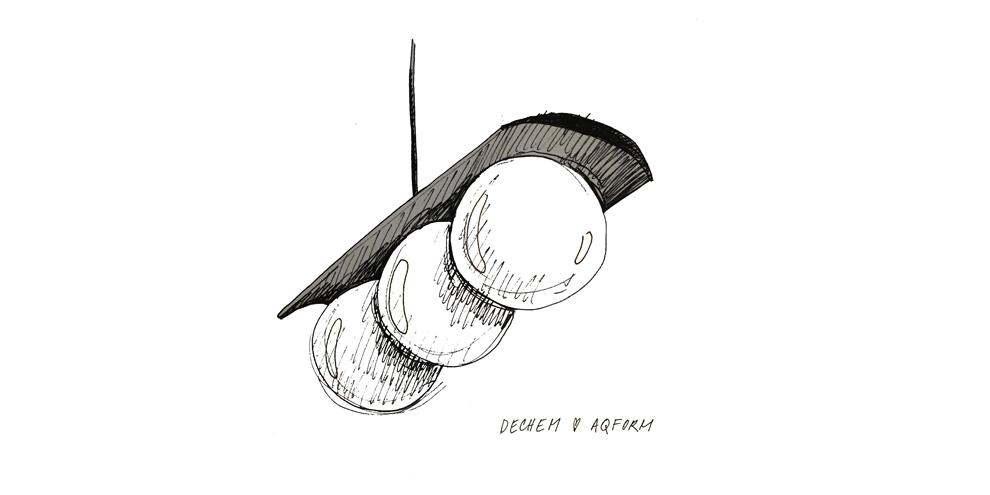 More than 1.5 years passed from the original idea to its implementation. It was a time of trials and tests that allowed us to find optimal solutions. MODERN BALL is a collection combining hand-made glass with machine-processed aluminum. Glass requires certain tolerances precisely because of the production process, which is never perfectly the same. Aluminum, on the other hand, requires almost surgical precision. During countless tests, we were looking for an answer to the question of how to reconcile these two opposing worlds? Many factors had to be taken into account to eliminate the differences between the requirements of these two materials. This process takes time and the following steps often correct the previous ones. 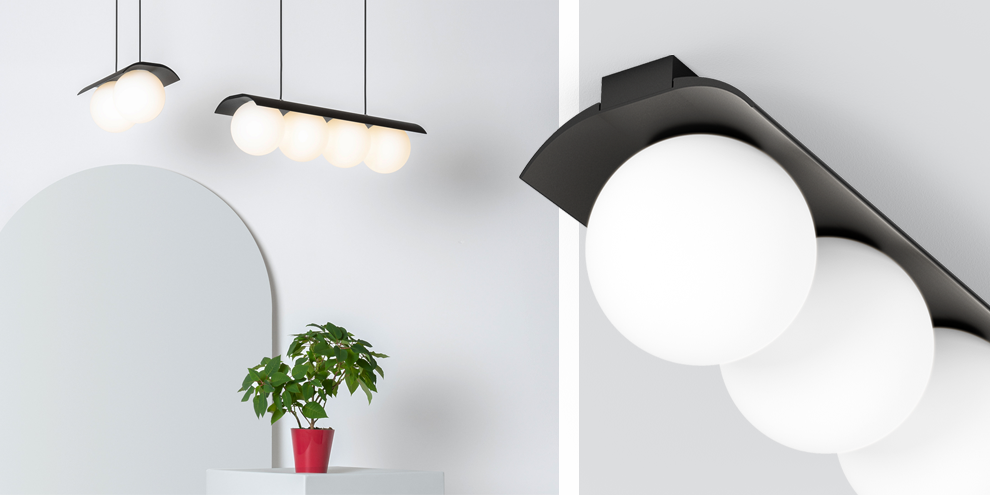 One of the challenges we faced was how to securely and aesthetically place the glass shades in the aluminum profile. We wanted to get:

In addition, standardization was important – it was crucial for us that the lampshade in a suspended, surface-mounted or wall lamp version should be assembled in the same, simple way. The solutions that are often used on the market are springs or assembly lugs. In the case of MODERN BALL, however, they did not meet all the requirements we set for the project. While testing various options, we encountered among others: the problem of mismatch between glass and aluminum, insufficient stability of lampshades, light losses and even solutions that looked good when the luminaire was turned off, but cast unsightly shadows on the lampshade when lit. Just imagine a luminaire that looks – by accident – like a Dalmatian dog after lighting up ... It was not what we wanted.

Therefore, after numerous tests, we have developed a new approach: special rings glued to the lampshade. They are aesthetically hidden and do not affect the lighting. After the first tests, we decided to add two additional threaded holes in the ring, which fully protect the lampshade against falling out. Despite the initial difficulties, we found a solution that meets all the conditions: it is aesthetic, easy to use, safe and protects the lampshade against breakage during assembly. In addition, the method of mounting the LED source is closely related to the developed method of mounting the lampshade. The thread to which the lampshade is mounted is screwed into its aluminum base. Each piece of this puzzle had to match the rest. 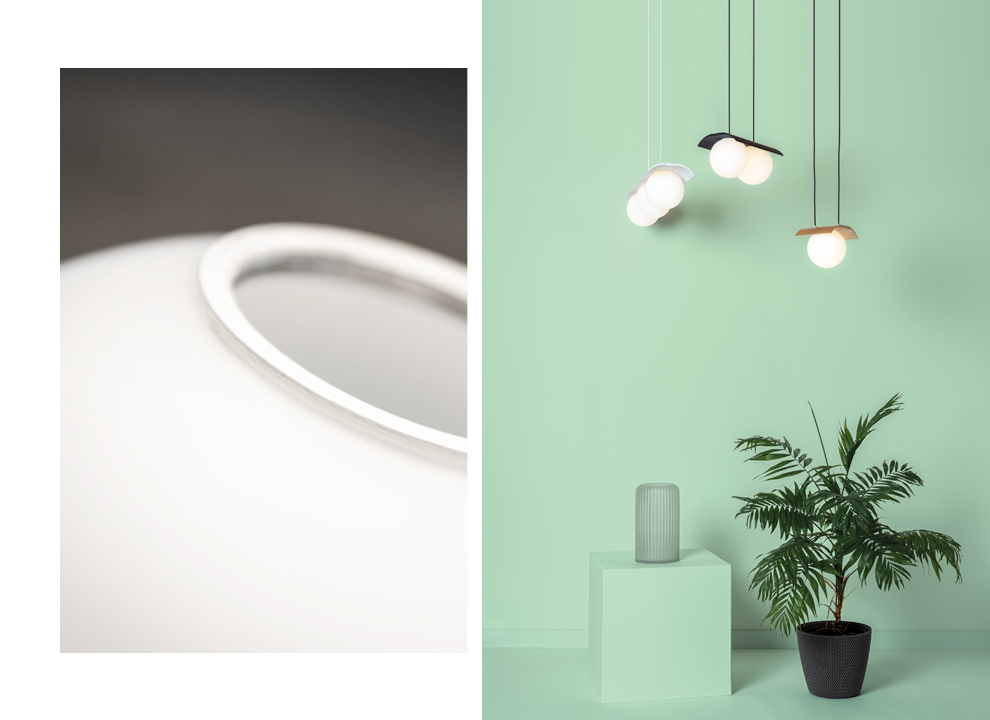 We have already cooperated with the DECHEM studio on the MODERN GLASS collection. That is why we invited them to the MODERN BALL project. Michaela Tomiškova and Jakub Janďourek, DECHEM designers, specialize in projects that use glass. They brought a fresh perspective on forms, a great deal of experience with the glass and its usage in lighting projects. We, as a producer, have added all the facilities along with the executive know-how. In cooperation between the designer and the manufacturer, both sides complement each other.

“When we start working on a new design, it is the beginning of a long, thorough design process to find the best solution. It involves researching, sketching, thinking, continuous discussions, modeling, prototyping and only after all these steps are we able to implement the final version. Especially when combining modern technology and traditional craftsmanship. Our goal is to go through this process to find the different strengths of these two elements and make them complement each other” – this is how DECHEM designers described their approach to design in an interview for DesignBiznes. 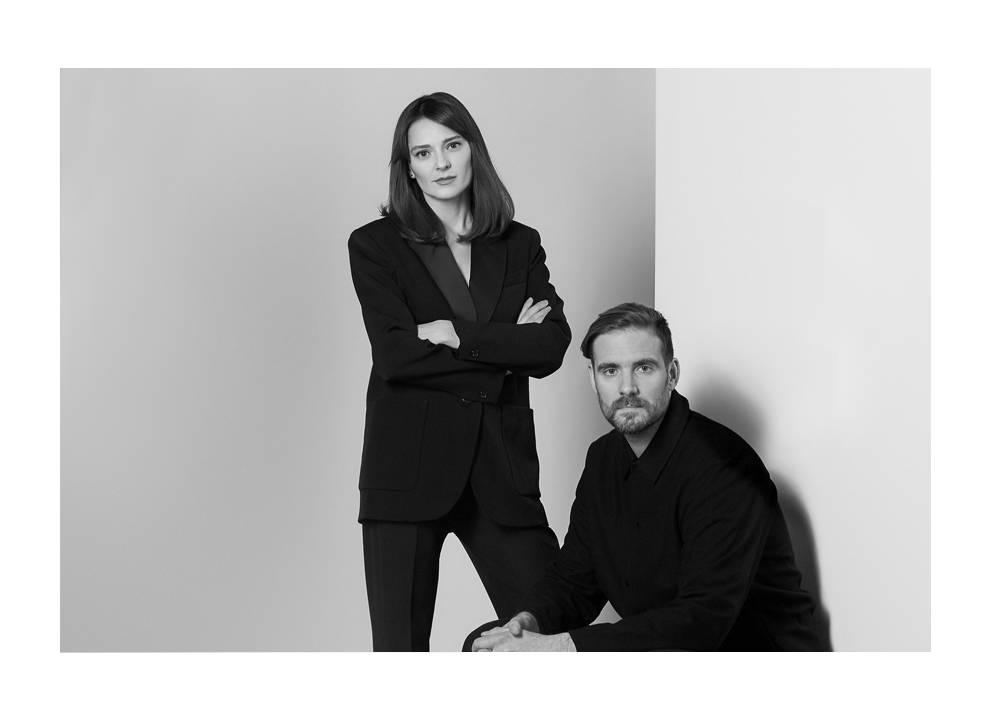 We tested the first concepts in virtual space on 3D solids. This allowed us to make the first decisions regarding proportions and shapes. 3D prints were the next step. They allowed to verify the scale in reality and check whether all components actually fit. One of the first luminous prototypes was assembled largely on components printed on a 3D printer and armed with a glass – also prototype – shade. Even then, the product made a great impression and we knew that we had chosen the right direction. 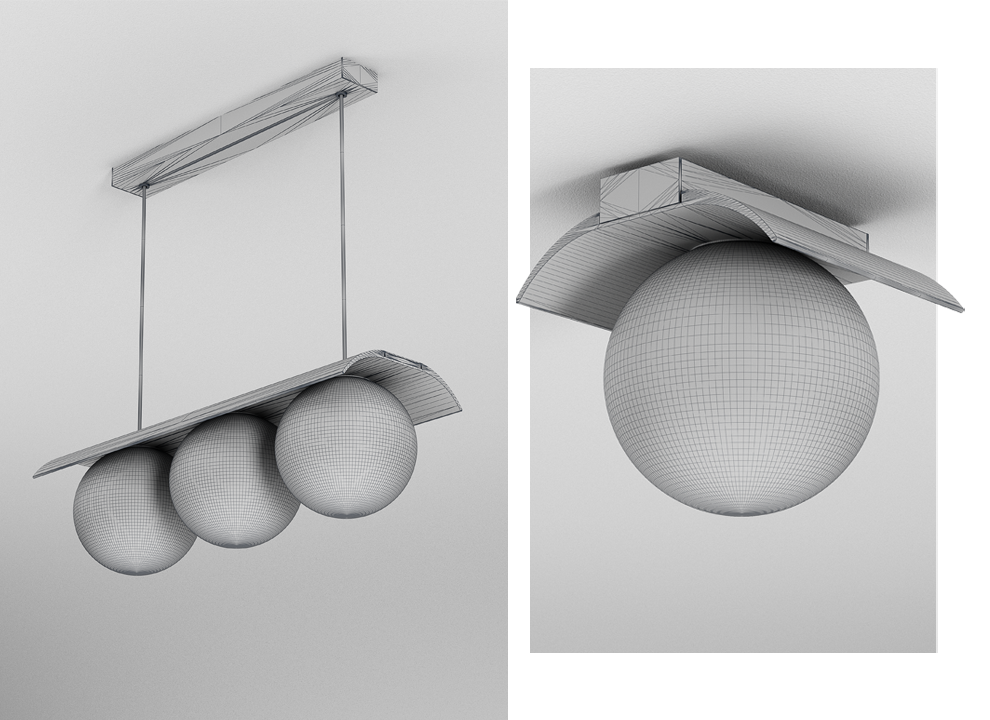 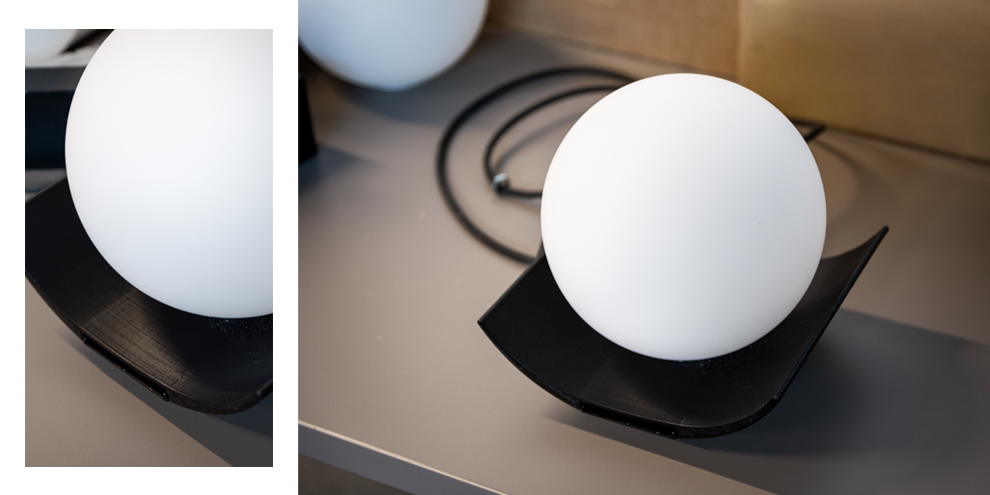 The MODERN BALL project is a response to a very specific need – lighting that combines a decorative function with maximum visual comfort. After all, employees spend long hours at the reception desk, the lighting of the table indirectly influences how we perceive the food we eat and the form of the lighting in the hotel lobby or lounge shapes our image of this place. 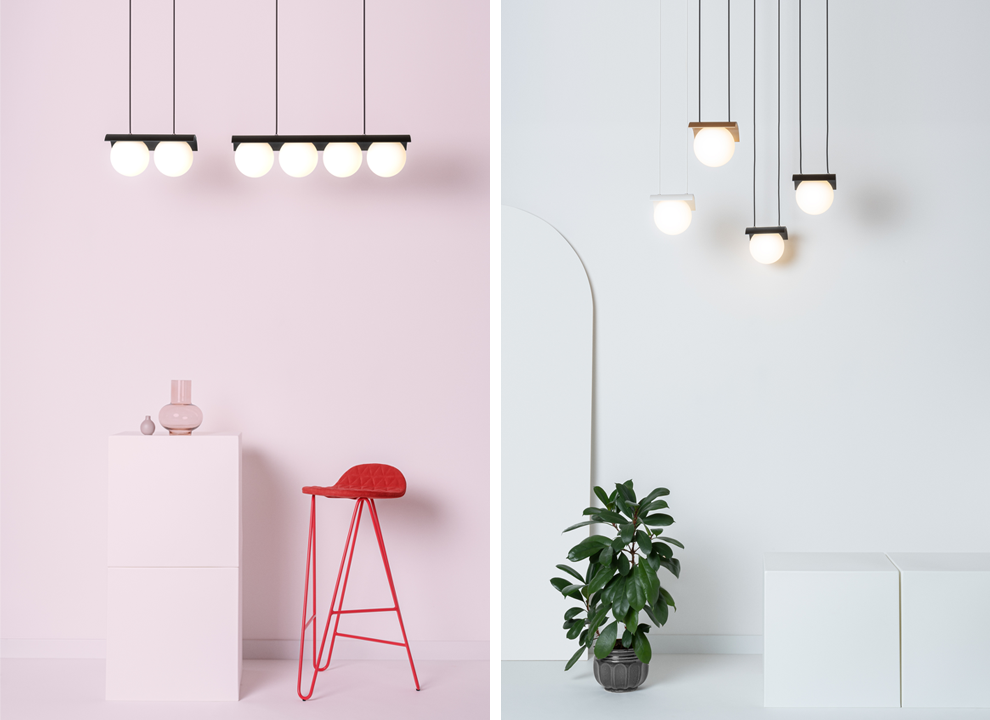 Therefore, when designing MODERN BALL, we focused on the comfort of the interior user – it was a "must have" of this project. Thanks to many tests, it was possible to create a lampshade whose shape almost 100% corresponds to the "bubble" of light emitted by the light source. This guarantees the maximum uniform illumination of the lampshade, thanks to which a single BALL module emits nearly 1000 lumens at CRI> 90, but does it in such a subtle way, that it can be successfully used not only as general lighting, but also as side mood lighting. The opal glass softly diffuses the light, which is very comfortable for the eyesight. 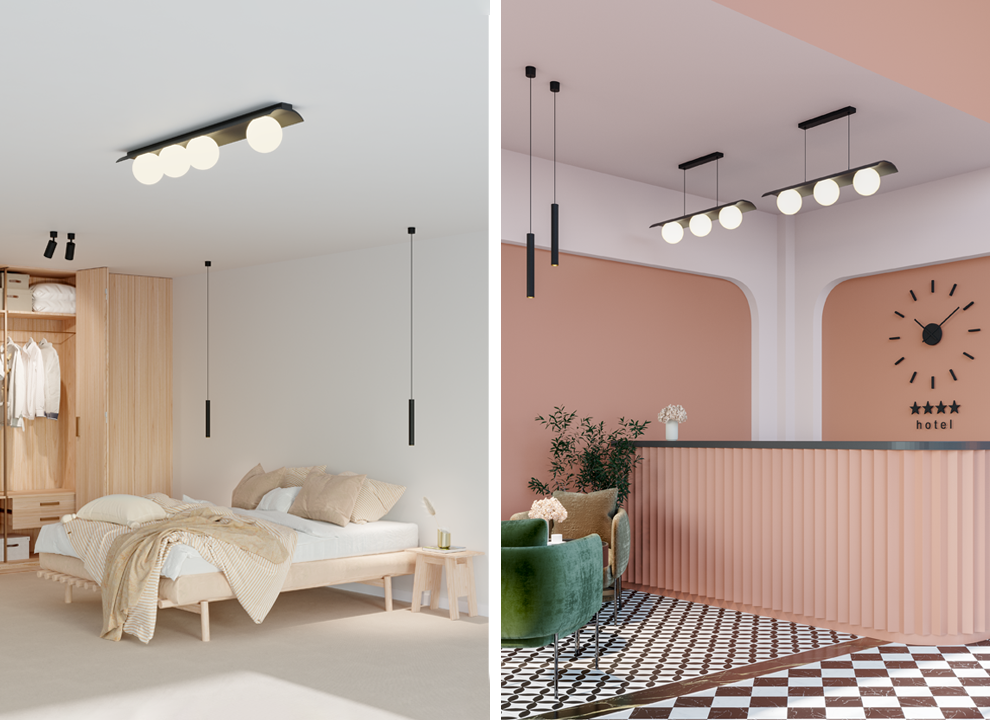 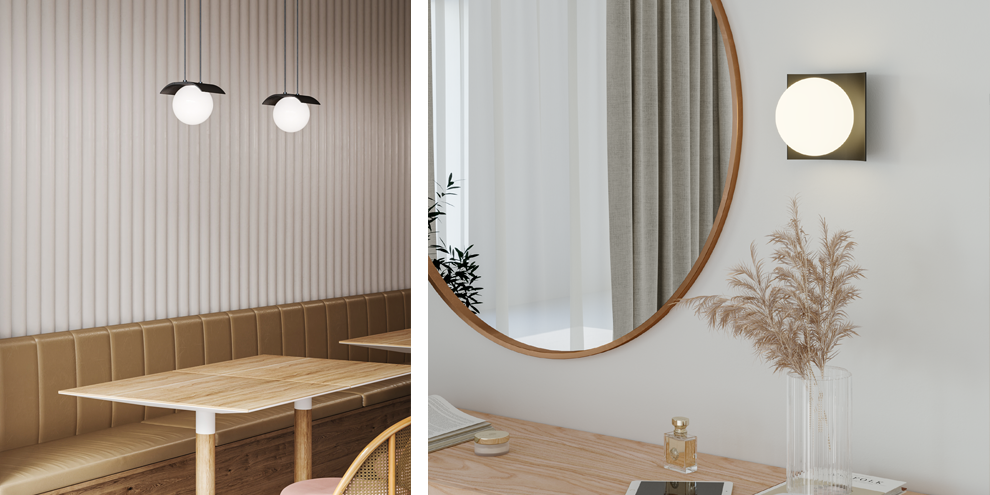 Finally, MODERN BALL offers three types of luminaires: suspended, wall lamp and surface-mounted. Compositions of symmetrically arranged balls combine a decorative function with high efficiency and visual comfort. It is a marriage in which technology fully complements the design. 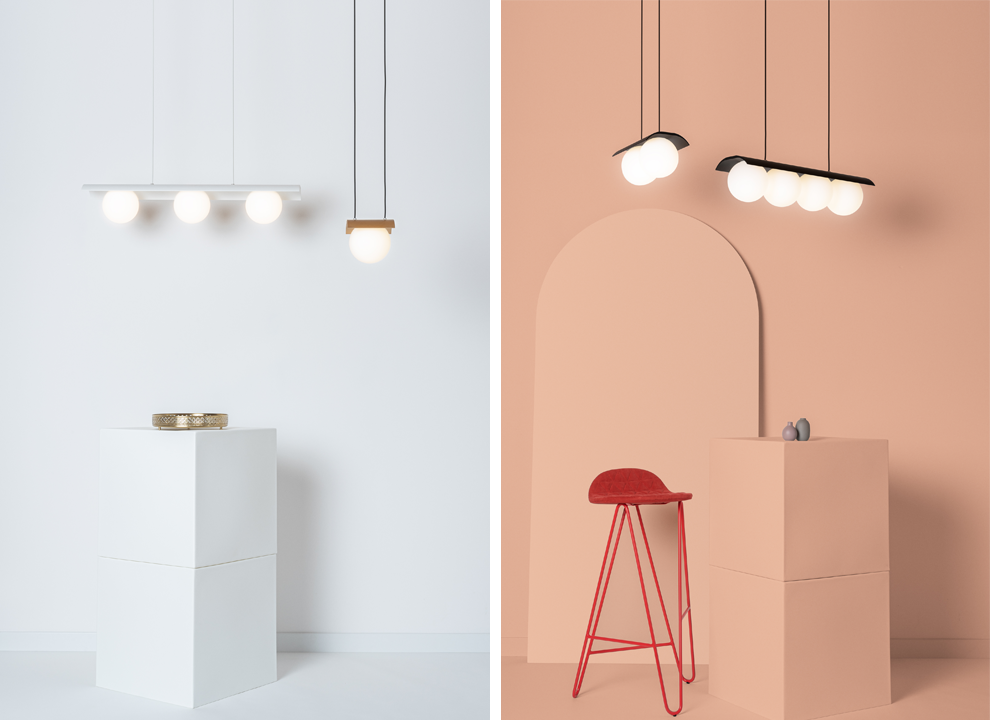 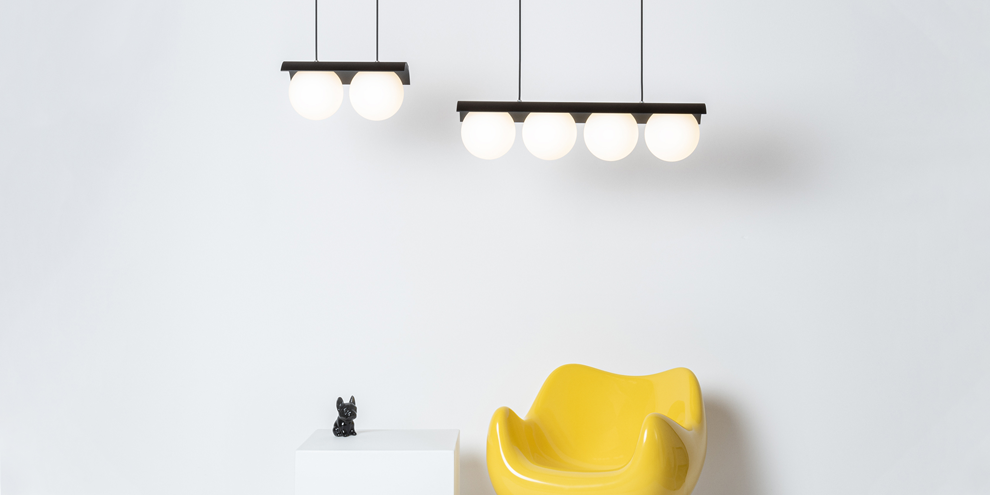